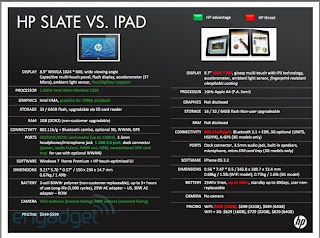 Well, well -- what's this? We just got our hands on what looks like an internal HP Slate presentation given to cool down some of the iPad hype amongst HP employees, and it just happens to have specs and pricing details on the elusive Windows 7 tablet. As we'd heard, the Slate will run $549 in its base configuration, which has a 8.9-inch 1024 x 600 capacitive multitouch display, a 1.6GHz Atom Z530 processor with UMA graphics and an accelerator for 1080p video playback (we're assuming it's a Broadcom Crystal HD chip), 32GB of flash storage and 1GB of non-upgradeable RAM. There's also a $599 version with 64GB of storage, and both models will have a five-hour battery, an SDHC slot, two camera, a USB port, a SIM card slot for the optional 3G modem, and a dock connector for power, audio, and HDMI out. Of course, what this spec list doesn't cover is software, and we still haven't seen much of how HP plans to make Windows 7 on a full slate device with netbook-class internals perform as smoothly or as intuitively as its demo videos. That's not a small challenge, especially since the iPad is out now and setting some pretty high expectations for how this new breed of tablets should work. We've got our fingers crossed -- show us something good, HP.