What the Hell is the West teaching these kids about India? 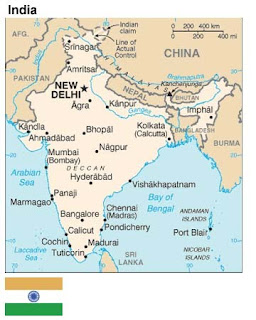 So I came across this critique request at an online photography website's forum from a gentleman who recently visited India for 5 weeks, and was seeking general comments on how well he captured the essence of India.

Guess what: not a single one of his about 100 pictures showed a high rise, the new Delhi Metro, the new malls, the Akshar Dham, the world's largest public transit system (the railways), the Rashtrapati Bhavan, the brilliant kids who can count faster than a DSLR can take pictures, the rising middle class feminine section thanks to growing tech jobs, etc, etc.

Every single one of his pictures show either a poor kid with no clothes on, a village girl carrying water in torn clothes, a cow, a goat, an over crowded rickshaw, a mother breast feeding her kid in public with not enough cloth to cover herself, etc., etc.

I am now sick and tired of the so called adventure photographers making a 2 week trip to India, taking pictures of the dirtiest neighborhoods and poorest people they can find, and posting their portfolio for helpful critique titled "India Part 1, 2, 3".

What the hell is the western world teaching them about India? Is that all they can see and find?

How about the Taj, the Red Fort, the biggest public rail transit system, the Akshar Dham, the desert, the folk dances, the festivals, the temples, mosques, the entrepreneurs, the IITs, the Art Academies, the musicians, the neighbors watching out for each other's kids, the middle school geniuses who can count faster than a DSLR can snap pictures, as photography subjects?